The Melanin-Rich Are Taking Over The WORLD!!!!... 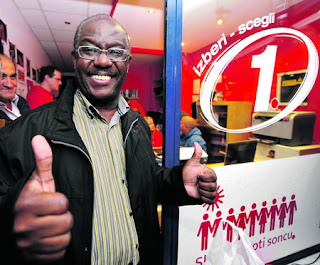 ...Well, not really... BUT.. They(we) can be found in some rather prestigious positions. About two years ago the U.S appointed its first black president, Mr. Barack Obama. This was a huge step, (in my mind and the mind of many others). And since then, Piran(in Eastern Europe) has elected its first black mayor, Peter Bossman! This guy's nickname is.... "Obama of Piran". Cute!


I was hard-pressed to find a picture of Mayor Bossman online. This is the only one I could find. (Hope it's really him-lol)


Excerpt of article at Af.reuters.com:


Peter Bossman, 54, became mayor of the picturesque seaside city of Piran in the second round of local elections after beating the centre-right incumbent, according to preliminary results.
"My victory shows a high level of democracy in Slovenia," Bossman, who came to Slovenia from Ghana 33 years ago to study medicine, told Reuters. He is a member of the Social Democrats, the leading party in the centre-left government.
"There are always small groups of people not accepting people who are different and in the first months after coming to Slovenia I felt that some people did not want to be with us (immigrants from Africa)," he said.
"But for the last 10 or 15 years I experienced nothing like that any more. I have no problems at all and I think people no longer see the colour of my skin when they look at me."
Posted by McKenzie Lacroix at 5:40 PM