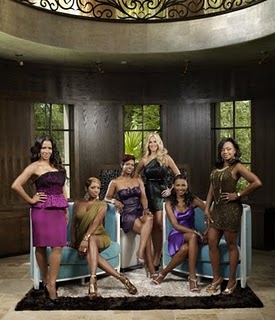 Okay. So, I missed the airing at 9pm last night on Bravo and had to catch the encore. Let me tell y’all! I was tired!! But, as promised on my last vlog, I am trying to get better at posting my RHOA (most recent) episode opinions.

Let me start off by saying this: Dwight Eubanks. How fancy a name is that?! LOL. Wooo. That Dwight is a MESS! On last night’s episode he and a friend
visited Sheree at her home. Although I DO NOT care much for Sheree she confronted him in a very private and classy manner about the rumor he began stating that he put $30,000 out of his own pocket into last season’s She by Sheree fashion show.  Of course he lied. Tried to slick talk his way out of it. He kinda pulled an Eddie Long. He didn’t deny it and neither did he admit to it. If Dwight is seeking some sort of acknowledgment for the time and
energy he invested in that show, he definitely should receive that. If y’all remember last season’s last episode, he worked hard for Sheree. And for that she thanked him (she says) several times. Possibly he seeks more than a “Thank you”.  I don’t know.. While beating
around the bush he did say that he paid for a seamstress and some copies from Kinko’s. Y’all do the math. I’m too tired for this foolishness.

And y’all know this Ms. Sheree is just FULL of surprises! Her 24 year old
daughter was on the cam last night! Yes. It is true. She has a 24 year old
daughter! I remember about a year (or more) ago I found an article about this
grown daughter that Sheree had. I could not believe it!! As you all can recall
from all past seasons Sheree has NEVER spoke of this girl. She’s never
been on the show at all. As far as the general audience of the show knew she
just had them two younger kids by that ole crazy-lookin’ Whitfield guy. I
guess she was trying to mask her age by keepin’ her grown woman child a
secret. Chilllle, boo! Sheree we can see that yo ass ain’t 25, 35, 45.
LOL. Okay.. She might be 45. But, damn sure not in her 30’s. We know you
was getting’ it in back in the early 80’s, Sheree. You ain’t
have to keep her hidden like that. Then she tried to mask it all by saying the
girl just graduated from college and is now back in Atlanta. Save it, Sheree.
That may explain her never being seen on the show, but it doesn’t explain
you NEVER EVER bringing her up as if she ain’t exist. Speaking of which,
where has her little kids been this season?? Ain’t seen hair nor hide of
them. SMH. Oh yes!!

Oh yeah.. And I found out Sheree’s gay friend’s name. I think I called
the boy Julian. WRONG!! His name is Lawrence. Just an FYI. I would love to meet
him! He seems too cool.  Anywayzzzz..

Ms. Nene. She wasn’t seen much on this episode. She sat her younger son down
and they spoke a little about Bryson’s (her eldest) issues with the law.
Her baby son told her about something his friend at school told him about
Brice. Something about him being on the news and all these crimes he supposedly
committed. I really don’t recall exactly what the lil dude was saying,
but one of the rumors must have been about something violent b/c Nene tells him
he should know that ain’t true b/c Bryson can’t fight. “I
can beat Brice up.. A girl.. Playa (the dog) can beat Brice.”  Now, Nene.
That’s fucked up! They gonna revoke his ATL Goon card behind that mess!

Cynthia (the model) was briefly on cam talking about her fear of
marriage and the relationship she has with Peter. Not much to talk about here.
She also says that Peter is about to turn 50 soon. BULL!!! As I said before,
he’s not a bad looking older guy, but he ain’t just turning 50
either! I’d give him maybe about…. 55..56. They need to cut the
crap.

And I usually save this one for last. Ms. Phaedra. My prayer for
her is for HUMILITY! This lady is just… OoooohhhhHHH!!! She needs a
reality check. How can one that is so educated, so pretty, so successful just
be sooooo … I can’t find the word for it off-hand. The closest I
can come to it is mean. Or maybe arrogant is a better term. I believe that she
thinks her money and stature is and will always carry her through life. The way
she speaks to her husband!! Um. That is a shame! And I just want to clear a lil
something up. I’ve said before that his look is played. It is. He’s
a cute guy, don’t get me wrong. He just ain’t as FINE as Phaedra
believes he is. And I actually felt really bad for him watching last
night’s episode.

So, the two of them were having breakfast and the conversation came
up about disciplining children. Phaedra says that she will beat on the kid. I
agree with that. Sometimes talking just don’t do it. (And then there are
times when beatings just don’t do it either. You gotta find that
balance.) Apollo says that he ain’t for that. Well, she goes into how
black households are different from white households (because Apollo was raised
in a white home) and whites tend to talk and blacks tend to beat. While I agree
with her opinion, why she gotta throw that in this man’s face like that??
She says that she has been knowing him for years. They both know by now that
they were raised differently. I am sure that time and time again this man
endures such condescending conversations with this woman. That’s just
sad! And you can see that he is fed up with her ass. Then later that episode
they had an older couple over that is their marriage mentors. When the food
came out Apollo did look at it rather oddly. Phaedra goes on to let us know
that he was raised by whites and he doesn’t appreciate finer cuisine. She
says that he likes canned foods and packed meats. Okay. AND??!! You knew that
when you married the man, toots! It is painfully obvious that she thinks
herself much more superior to him. So, why then did she marry him?!!!!
I’m starting to believe those online allegations that she couldn’t
get a rapper or ball player to knock her up so she went to the next best thing:
A mixed man with nothing but jail time. Phaedra. GET OVER YASELF, hun!

And Kim... I totally forgot about her.(oops'seeee) She performed at the White Party. She's a mess. Kandi saved the day by playin' hypeman (woman) for her. All I can do is shake my head and say this... Stop while you're somewhat ahead, Kim.

Published with Blogger-droid v1.6.1
Posted by McKenzie Lacroix at 9:26 AM