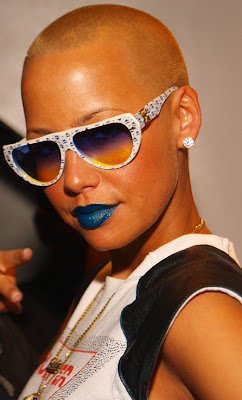 Hold up! Do y'all remember that press conference Ms. Khalifa (Amber Rose) held the other day that was  plastered all over the 'net for her upcoming reality tv series "Behind Her Shades"? (I DID NOT watch it. So I hear...) She explained that the show would be about her daily life, which includes the opening of her boutique which specializes in sunglasses and accessories. She also said that VH1 is the network the show belonged to.

Wellllll... A VH1 representative has told MTV News that VH1 has nothing to do with this show (at the time). But, Amber has had cameras following her. I hear she hired these folks herself and plans to shop her show.

I am shocked!! This is insane! Let me find out Amber done pulled a Sandy Lyle (Y'all remember Reuben's best friend on Along Came Polly that was a childhood star and was having a hard time dealing with his irrelevance and hired dudes to follow him with a cam, talking bout he was going to have his own reality show.... THAT'S AMBER RIGHT NOW!)... I can't!

But seriously. I am having a hard time believing that Amber would lie like that! Maybe she HAD a deal with VH1 and it fell through or something. Why else would she throw their name out there?
The rumor that she had a camera crew follow her in hopes of shopping her reality show is still hilarious as hell though! I call that the Sandy Lyle Syndrome.

Here's a clip from that press conference:

Posted by McKenzie Lacroix at 9:54 AM