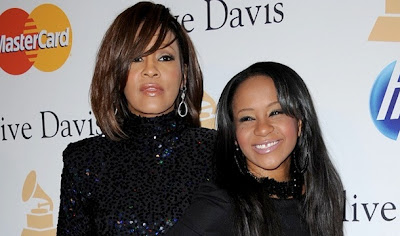 I really just wish the media would let, my 80's auntie, Ms. Houston go on into Glory and rest in peace. Every time it seems to simmer a bit, something comes along to keep the negatives of her memory alive. It's really sad. And I tend to turn a deaf ear and blind eye to it all, but...

Last night I was doing a little channel surfing and came across Dr. Drew's show on HLN right as it began, and stayed tuned for the remainder of the program after hearing Bobby Brown's sister, Leolah's, opening accusation that Ray J was a (drug) "runner"for Whitney and (she believes) is to blame for Whitney's death!!! O.O

Yesterday afternoon, the coroner released information, stating that there was cocaine in Whitney's system and this led to a heart attack, which lead to her drowning in the tub.  Armed with this definitive information, Leolah Brown explained her theory by saying that she saw Ray J on camera, coming out of the hotel and getting into a car. She says that his head was down and he seemed to be trying to hide his face. She considered his behavior suspicious, because she knows Ray J to be an attention whore. She believes that he hid his face in an attempt to not be tied into Whitney's passing in any way? (possibly) I tell you what... Ms. Brown planted a seed right there!! Who would have ever thought???... (Not me. That's for sure.)

And while she was at it, Leolah, set the Ray J/Whitney rumors straight: THEY WERE NEVER A COUPLE!!, she says.  Simply a middleman (runner) and a client relationship. She says that Whitney damn near fell out of her seat, laughing, when she asked Whitney if she were seeing Ray J in a romantic way. Now, I don't know any of these folks mentioned in this post. Buuuuuutttt... I do gotta say, sometimes you gotta throw a nosy bitch off. If, in fact, this conversation with Whitney laughing her head off at the thought that she and Ray had anything going on occurred, maybe she ain't want her (ex)husband's sister all in da mix! If that were the case, she did a good job at throwing Ole Leolah off the trail.

Later, in the "Brown segment", some of Bobby's nephews joined the conversation and everyone had something to say about Whitney's fam. Especially about her brother, Gary, and his wife, Pat, who you may recall recently did the Oprah interview. Leolah said that something ain't right about Pat. And the nephew said Gary left Bobbi Kristina crying in the hotel hallway. There were said speculations that Whitney's fam is out to get custody of Kristina for the financial gain of it all. (PLEASE!!! As if the Brown fam wouldn't be lookin' out for them ends as well!) Leolah says that while Whitney was alive, some time ago, she was granted custody of Bobbi K. and once the papers were signed, the only way to release custody back to Whitney, was for all parties involved to go back before the judge and sign papers again. That last step never took place, so she believes that she is still the child's legal guardian. She'd be right on that one.

I must say, that interview was... insightful.