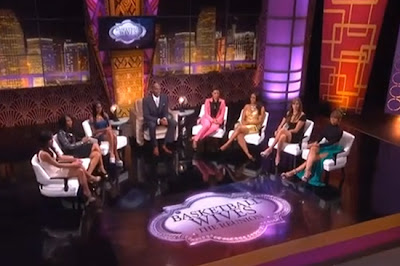 Last night officially, (officially), wrapped up Season 4 for Basketball Wives on Vh1. And I, personally, think it was so bland. However, a few moments stuck out:

2. The continuation of Tami and Kesha getting into it over the whole bullying in Tahiti situation. Tami refuses to title herself as a bully. (It's hard to see yourself. This is true. But we are all looking at you, Tam and you's a bully.) And Kesha gets a little feisty up there on that stage, complete with head boppin' and eye rollin'. These ladies are a TRIP! But what takes the cake is when Kesha confronted Suzie, telling her that the whole thing began with her taking what Kesha said about Tami back to Tami. Suzie denies that she took anything back to Tami. And Tami even speaks up for her, saying that she didn't. THIS IS A LIE befo' GAWD! I could have swore that on the ride back to their lil huts in Tahiti, Suzie was looking all sad (because she ran her mouth) and Tami said (what??)... "Suzie you did the right thing." By telling her what Kesha said, right?! (Or am I confusing two different episodes? 'Cause y'all know Suzie is forever carrying a damn bone!) And even at the table when it was all going down, I though Tami said Suzie told her, when Kesha asked where she was getting her info. But now, all the sudden it's "Suzie ain't say shit!" Riiiiiggggghhht!!

3. Shaunie faked like she ever even contemplated the idea of there not being a Basketball Wives Season 5. When John Salley asked that question all of America could have answered! No next season and let all that good ole money pass you by Ms. Shaunie??! Please!! I don't think so! Of course there will be a Season 5 (and 6 and 7 and so on till the public completely tires of y'all).

AND THE BIGGEST MOMENT OF 'EM ALL:

4. Jennifer and Evelyn's polygraph results came back and it's conclusive: They miss being a part of each other's lives. And they hugged and cried and (seemingly) made up!! Right there on stage! And I have to tell ya... I fought back tears. I could feel the emotion. Right through the screen. Two friends for over 13 years, I believe. Torn apart by life and a little stubborness on both sides, all fueled by Twitter and reality television. That sucks!! And Evelyn was truly hurt by it all. That showed during this season by her bringing it up like every damn episode! And come to find out, Jennifer was just as hurt, but a little better at masking it. And now, they are back together. Maybe... Was that just a reunion show "reunion" or a real-life reunion? (We'll see as time goes on)

I'm ready for a Season 5. I can't even lie. As much as I hate all the bickering and backstabbing, it gives me something to blog about. So, uhhh.. BRING IT ON!
Posted by McKenzie Lacroix at 12:13 PM