The Premiere Of Real Husbands Of Hollywood: Funny Or....?? 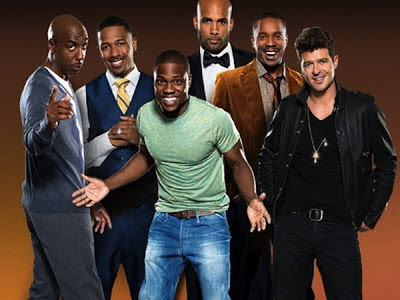 My (self-appointed) "Creative Director" advised me not to write about BET's Real Husbands Of Hollywood, but I gots to!!

That damn premiere was HORRIBLE!!  Did y'all see it?!

I am mad that BET used Kevin Hart to trick me into tuning in to their station! Had I not been channel surfing, I would have missed the premiere the other night.  But once I did come across it, I decided to watch because the ads with all the fake slapping in it looked promising.  A show mocking reality tv seems like a good, humorous idea. (Why not, right?)

Um. I watched the entire show and genuinely laughed at maybe two lines during the entire 30 minutes.

I'm willing to give this show a chance though, because I believe in Kevin Hart and Robin Thicke.  So, I'll be tuning in next week.  But if the second show is just as wack as the first, I gotta let it go and take my disappointments with me.  (A damn shame)

Posted by McKenzie Lacroix at 9:33 AM