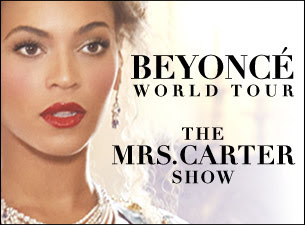 Beyonce.  Queen Bey.  King Bey.  Not arguably the greatest musical performer of my generation.  I will be in attendance at her July 29th show at the Verizon Center in DC.  And I cannot wait!!  I love seeing Bey do her thing on the stage.  Beyonce has really perfected her craft.  (Which is music.  NOT acting.) Seeing that live is going to probably be the highlight of Summer 2013 for me.

And as excited as I am, I gotta let y'all know: Securing my tickets was a HUGE PAIN!!  Yesterday at 10 AM the Mastercard Pre-sale began for her 2nd show in DC on July 30th.  Beginning at 10 AM EST on the dot, I entered the "Masterbey" code over and over, up until damn near 8 PM, trying to get my hands on tickets.  UNSUCCESSFUL!!  (But I'm a persistent one)  I laid down around midnight and said to myself, "I CANNOT close my eyes before I make a few more attempts to get these damn tickets!"

I tried several times to get a better section than 218 in the Verizon Center for the July 29th date,(because the 30th's tickets were closed until this morning at 10 AM for the Live Nation Pre-sale. Grrrrrr!), and damn near missed out on the Section all together.  After a few tries, TicketMaster began to say the 400-something Sections were the best that were available.  AND I DAMN NEAR CRIED!!  I let it cool off for a few minutes, went back in and the first 218 Section tickets that appeared, I wasted NO time entering my credit card information!  Me and my cuz was screaming via text. [*Dancing and singing*** "We gonna see BeeeeeeyonnnnSAY!!"]

It should NOT be that damn hard to get tickets!  The same day the July 29th tickets went on sale, I recall all sorts of reports that the tickets were SOLD OUT.  (But I just snagged tickets for the event last night, though.) What kind of games do they be playing with these high demand events?!  It's really not fair.  A lot of folks ain't got time to play around and wait around all day, checking on some damn tickets. But....