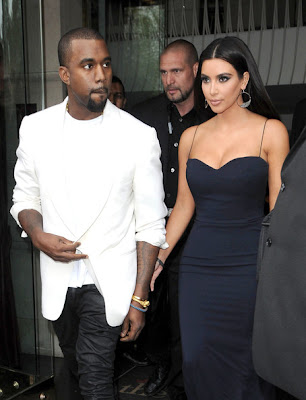 Kanye West is a great, passionate artist, whom I LOVE!  But I must admit that him hooking up Kim Kardashian shone him in a different light for me.  Since they went public,  I have said NOTHING about Kanye and his choice of lady, because I'm so ON 'Ye and when I want, I totally practice the whole , "If you have nothing nice to say...", but Kanye seems too real to take such a woman seriously.  Then to not only seriously hook up with her, but to impregnate her is too crazy for me to even begin to comprehend.  And I hate to look at those that I believe have presented themselves time and time again as a REAL dude, as anything other than what they have presented themselves as: REAL.

Like, the whole Beyonce faked her pregnancy thing.  I LOVE me some Jay-Z.  Jay too real for that kind of shit (so I'd like to believe).  No way Jay would go along with a fake pregnancy!!! The idea is just too silly.  But, sadly all signs point to just that.

And Kanye.  This dude got some sense about him.  He seems to LOATHE the get-over bitches.  The man that (I'm guessing) penned (but definitely performed and made us all love) "Gold Digger".  The man that can't stand a hoe.... Wifes a known one.  Ain't he the same dude that went on Twitter and said Amber Rose had been with "THE WHOLE OF HIP HOP"?!! C'mon, now!  You can't keep it that funky and later turn around and embrace the most infinite levels of that which you hate.


Though these scenarios effect my life none, it's just some shit that my mind has the hardest time believing and understanding.

So, over the weekend, the internet got a hold of the below, low-quality vid of Kanye performing in London and following up his performance of "Clique" with one of his rants that we all love. (Or at least that I love.)  He mentions that he doesn't like Justin Timberlake and Jay-Z's "Suit & Tie" track and that seems to be all these media folks heard.  All weekend I've been looking at tweets and headlines that boast "Kanye West Dissed Justin Timberlake And Jay-Z Onstage!!"  Most times, I hate media!  (Ironic, I know. As ironic as Kanye's choice of baby mama??..I hope not.)

Besides him "dissing" one of his best pals, Jay-Z, (and JT), he questions what are entertainers doing "this shit for?".  He mocks sponsorships and having to present yourself as the sponsors (big companies) want the public to see you just to get a check out of them. And he also mentions that The Grammys can suck his d*ck!! Once again, this is Kanye in pure Kanye fashion.

What is there not to love about his public outcry of not conforming for pay and continuing to bash the highest award program for musical recognition??  (This is what stuck out in my mind after viewing) An example of how passionate Kanye is about his beliefs and doing only what Kanye wants to do.  With his latest relationship, I almost forgot that he's one of the few entertainers that actually has beliefs and stands for 'em.
Posted by McKenzie Lacroix at 10:29 PM