Olympic Star Known As "Blade Runner" Charged With The Murder Of His Girlfriend In His Home!! 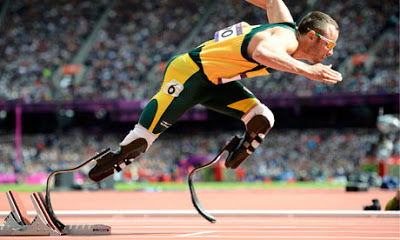 Oscar Pistorious rose to fame and became a great source of inspiration for many all around the world, in 2012 as the first Paralympian to compete in the (able-bodied) 2012 Olympics, as a double amputee.

Today, Pistorious has been charged with the murder of his model girlfriend, 29 year old Reeva Steenkamp.

Pretoria, South Africa (CNN) -- Olympic runner Oscar Pistorius has been charged with murder in the death of his girlfriend at his South Africa home early Thursday.
Reeva Steenkamp, 29, and Pistorius, 26, were the only two people in the upscale Pretoria home at the time of the shooting, police spokeswoman Denise Beukes said.
In keeping with South African law, Pistorius will be named officially as the suspect when he appears in court. The first court appearance is scheduled for Friday.
The state will oppose bail, Beukes said.
Pistorius will not appear Thursday because the public prosecutor needs more time to prepare the case, police spokeswoman Katlego Mogale told CNN.
He arrived Thursday at a police station in Pretoria.
Beukes said that police were alerted to the shooting by neighbors and that residents "heard things earlier."
A pistol was recovered at the scene, police said.

Dang! R.I.P to Ms. Steenkamp
Posted by McKenzie Lacroix at 9:11 AM