10- Year Old Boy Killed By A Sign At An Airport 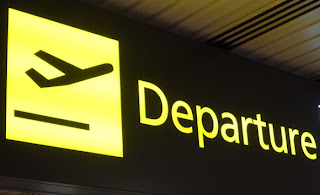 The other two children involved have been treated (and released, presumably), while the mother, Heather Bresette, remains in critical condition at University Hospital.

Albert Osorio, 46, of Birmingham told al.com () that he was close by when the sign fell. He said a loud boom was followed by screams from the family and witnesses. Then he and five other passers-by lifted off the sign. http://bit.ly/XvWV7p
"The whole thing flipped down on those kids. It took all of us here to stand it up," he said.
Airport spokeswoman Toni Herrera-Bast said officials aren't sure how the sign fell. She said it happened about 1:30 p.m. Friday in a pre-security area of the airport. The airport continued operating while rescue workers tended to the family.
The airport completed the first phase of a more than $201 million modernization effort and opened newly renovated concourses last week.
Mayor William Bell issued a statement saying the city offered its full support to the Airport Authority in investigating the accident.


Such a freak accident.  Unbelievable.


Photo
Posted by McKenzie Lacroix at 12:35 AM