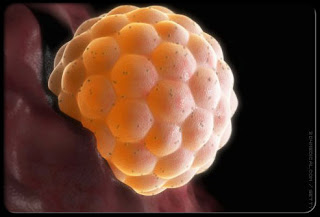 North Dakota's House of Representatives have passed an amendment that will give embryos rights (from the moment of conception) and ban ALL abortions in the state, with NO exceptions, if accepted by the people of the state in November 2014.

North Dakota became the first state on Friday to pass a fetal personhood amendment, which grants legal personhood rights to embryos from the moment of fertilization. The state House of Representatives voted 57 to 35 to pass the amendment, after the Senate passed the same measure last month.
The measure will now appear on the November 2014 ballot, and voters will be able to accept or reject it. If it passes, it will amend North Dakota's constitution to state that “the inalienable right to life of every human being at any stage of development must be recognized and protected.” The amendment would ban abortion in the state, without exceptions for rape, incest or life of the mother, and it could affect the legality of some forms of birth control, stem cell research and in vitro fertilization.
“The North Dakota legislature has taken historic strides to protect every human being in the state, paving the way for human rights nationwide,” Keith Mason, president of the anti-abortion advocacy group Personhood USA, said in a statement on Friday. “This amendment strikes the balance of accomplishing more for the unborn than any other amendment the nation has ever seen, while protecting pregnant women and their right to true medical care. We applaud the North Dakota House and Senate for their willingness to protect all of the people in their state.”
Similar fetal personhood initiatives have been rejected by voters in several other states, including Mississippi, one of the most socially conservative states in the country.
North Dakota state Rep. Kathy Hawken (R-Fargo) told HuffPost on Thursday that she and several of her Republican colleagues strongly oppose the bill and are planning to protest it at a women's health rally on Monday. "I have so many friends with grandchildren from in vitro fertilization, and to take that away from these people who desperately want children is not okay," she said. "I believe if men had babies we would not be having this discussion."

I'm thinking this amendment will be rejected come November 2014.
Posted by McKenzie Lacroix at 5:13 PM

Email ThisBlogThis!Share to TwitterShare to FacebookShare to Pinterest
Labels: In The News, Parenting