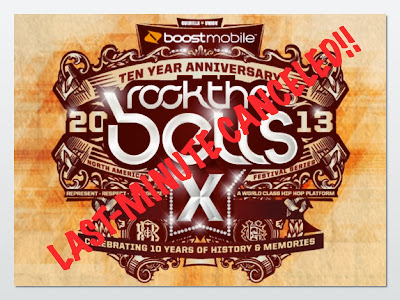 Just two days prior to the Washington, DC stop for the infamous Hip Hop music festival, Rock the Bells, organizers announce that the show will not be coming to DC (September 28 & 29) nor NYC (October 4 & 5) this year due to poor ticket sales.

Here's a statement from Chris Weisbergm the founder and owner of Guerilla Union, (the festival organizers):

“First and foremost, it is with great sadness and disappointment that we must cancel the Washington, DC and New York City Rock the Bells dates due to lack of ticket sales. I, along with our staff, the artists, and all of the sponsors, media partners, local promoters, and radio stations involved are thankful for our supporters and the fans that planned on attending. It’s extremely unfortunate that we can’t complete the last half of the 10th Anniversary Rock the Bells tour. We did everything in our power to save the show. Unfortunately, the financial loss would have been devastating. This festival has been ten years in the making.  I am truly sorry we could not produce the show for all the fans who did buy their ticket in support of.”


Damn! What a bummer!  I know people that were really looking forward to this event and even made plans to come from other states to partake in the 2-day affair.  Sure, they get their ticket money back, but what about hotel and travel costs??  Not to mention having such a wonderful musical experience snatched away from you at the very last minute.

Pretty tacky on the timing.

SOURCE
Posted by McKenzie Lacroix at 10:40 AM