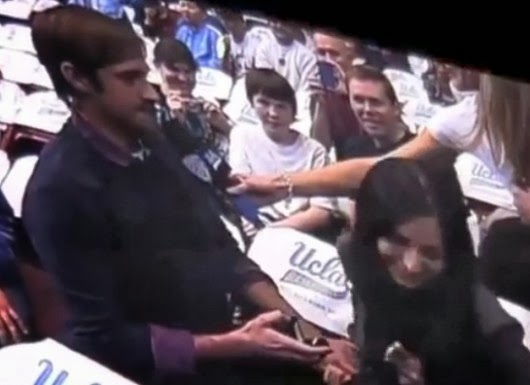 A Los Angeles comedian, Patrick Moote, was caught on camera recently proposing to his girlfriend while at a UCLA basketball game.  And though we all say a collective "Awww", the outcome isn't sweet.  His girlfriend declined the offer and fled the scene.  This video went viral on YouTube and left everyone (including Moote) wondering, "Why not?".

Moote took this answer in stride and decided to make a documentary called 'Unhung Hero', detailing his endeavors to achieve a bit more length and girth.

The botched proposal bruised Moote's ego, but he told HuffPost Live's Nancy Redd that his girlfriend's dissatisfaction with his size wasn't completely out of the blue.

"It's not like I didn't know that it was kind of a problem. I see my penis every day, so I was kind of aware of what was going on," he said.

After he recovered from the initial shock of being rejected, Moote started to think about how penis size is an issue that every man worries about but no one wants to discuss publicly. He decided to change that by making a "cockumentary" called "Unhung Hero," which documents his efforts to lengthen his member through pumps, pills and myriad zany methods.

Now that he's made a film about his penis, the cat is pretty much out of the bag about its size. So how has that affected his dating life?

"Most girls don't think I have a penis at all at this point, so if they find out that I do, it's kind of like, you know, 'Oh, well look at that! It's actually there,'" he said. "It's like a homeless guy bringing you home to his mansion, like, 'Whoa, where did this come from?'"

I'm thinking: Is this all an intricate prank to garner attention for this unknown comedian or is this really real??

Posted by McKenzie Lacroix at 12:39 PM