My 2011 MacBook's hard drive recently went kaput on me and I replaced it myself.  You can click here to read all about that process.  Turns out it was extremely easy to do.

1.  In recovery mode I chose to (re)install the Sierra OS via the internet but the hard drive was not an option for which to place the system on.

I tried and I tried.  Several hard shut downs (by pressing the Power button for a few seconds) and the hard disk never appeared as an option!!!!  I'd choose my WiFi and enter my password and then choose to install the OS and would be met with a message that made me cringe: "Untrusted_Cert_Title".  And that was it.  I could go no further.

I eventually had to get my Google on.  I found the most bizarre solution:  check the terminal for the date and time.  If incorrect, this is your problem.  Correct it and try again.  And it worked!

Here are the instructions I followed while in Recovery Mode:


Great, right!  Now I'm on track.  All I have to do is go back, install the OS via internet and be good to go!

That turned out to be a big SIKE!

I tried to install Sierra again after correcting the computer's date and time, but still,  I needed a place to put it. (Why couldn't I wrap my head around this reality???)  The new hard drive is still not showing as an option.

Ugh!  BACK TO GOGGLE!

I found a solution on ifixit.com to settle the hard drive option issue once and for all:

Once done with the above instructions, close disk utility and voila!  I was then able to successfully get the OS onto the hard drive and use my 'Book.

Start to end it took me TWO HOURS!!

So, I give to you this comprehensive solution to the two issues I encountered to save you time and frustration.  Had I known these solutions at the beginning.... Had I sought solutions instead of thinking shutdowns would make a difference and produce a technical miracle, I could have saved myself at least about an hour, I believe.

Go forth with the knowledge, my fellow DIY-ers!  Fix your "vintage" MacBook and be merry!  Use the money you saved on a professional fix and do something nice for yourself.  (Start a "New MacBook Fund" with it, maybe.-- haha)

Posted by McKenzie Lacroix at 12:28 PM No comments: Links to this post

I Replaced My MacBook's Hard Drive & You Can (DIY) Too! [Video] 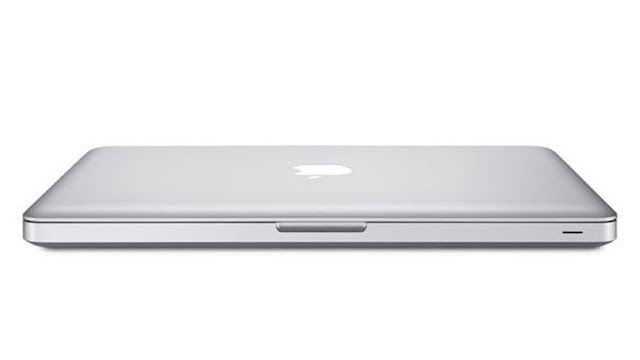 I know.. Me and this damn MacBook, right?!

About a year ago I began having issues with the ole 'Book, visited Apple and got the $600 issue fixed at no cost to me.  Click this link to check that whole story out: 2011 MacBook Pro Recall

And now I'm back with yet another story about this great machine.  (I mean.. It is 6 years old though. What do I expect, huh?)

About a month or more ago my computer began acting funky again: running super slow, getting to the desktop on start up super slow, internet running super slow.  SLOW!  Everything was slow.  And soon after that began I began to get reminders that my storage space was dangerously low.  I did a Time Machine backup of everything and proceeded to erase documents and pictures off of the computer that I didn't much need to have readily accessible.  Though this freed up some valuable storage space, it did nothing for the issues I had been having with the computer.

Next, I decided to try erasing the hard drive and start from scratch.  No matter what I did, I could not erase the drive.  It wouldn't unmount.  And then I did something, I think it was installing the OS from Recovery Mode, and it appeared as though the hard disk had nothing on it, but once I got Sierra back onto the computer and began to use it again I continued to suffer issues.  I checked out the hard drive again and lo and behold it was once again full.

For weeks I toyed around with reinstalling the OS and attempting to erase the hard drive and nothing worked.  A time a came that the Book did this series of 3 consecutive beeps at me and wouldn't get to a sign on screen when I turned it on.  And that's when I knew I had to go see the geniuses.

Wouldn't it be just my luck that my 2011 15" MacBook Pro had been officially declared "vintage" 10 days prior to my visit to the Apple Store?!  (I mean, I agree with them.  It's pretty old in technology years.)  And "vintage" means that Apple will not touch it.  As it was explained to me by the kind Genius guy, Apple no longer has the tools and/or parts to fix vintage machines.  So, I guess they would if they could, but they simply cannot.

Though he could not fix it for me, The Apple Genius did run diagnostics on my computer and found that the hard drive had a red triangle with an exclamation point, which indicates that it needs to be replaced.  He pointed me to an official third-party Apple repair shop or Best Buy for a professional repair.  And then he says, "You could get a hard drive and fix it yourself.  It's honestly really easy to do."

That afterthought laid on my ears like magic.  Tell me more, my eyes begged (I'm sure).  He suggested that I check out MacSales for a new hard drive and instructional videos on how to replace the drive.  He stressed that I want to perform this task in a static-free environment, but other than that, was pretty confident that I could do this repair myself.

I shopped MacSales for a new hard drive and came across a used, original Apple 500 GB hard drive for $22!!!  I ordered that along with a tool set to get the job done.  Including taxes and shipping I paid about $29.  I received the items in less than a week!

I sat down with my MacBook not really sure about if my environment was, indeed, static-free or not. I opted to sit on my bed and fix it on a portable desk surface.  As long as my feet weren't touching the carpet, right?? (I had no clue and was too lazy to research it.--Horrible!). 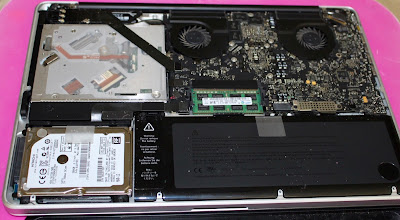 The guy from the Apple Store was right!  Took me about 25 minutes to swap the hard drives and it was easy-peezy!  The most time-consuming task (for me) was the removal of the screws from the bottom of the computer.  There are 3 long(er) screws and 7 shorter ones.  The shorter ones seemed to be tighter than the longer and harder to remove, though I could also just blame it on being inexperienced and a little afraid (remember that static..).

Here's the video I followed:

Instead of going to the professionals and paying $200 or more for a fix, I fixed it on my own for under $30.

If your hard drive needs replacing, you may want to consider saving yourself some dough by going the DIY route.

Stay tuned for a soon to come post on my process of installing the OS on the new hard drive and getting back to a functional (vintage) MacBook.

Posted by McKenzie Lacroix at 8:56 PM No comments: Links to this post