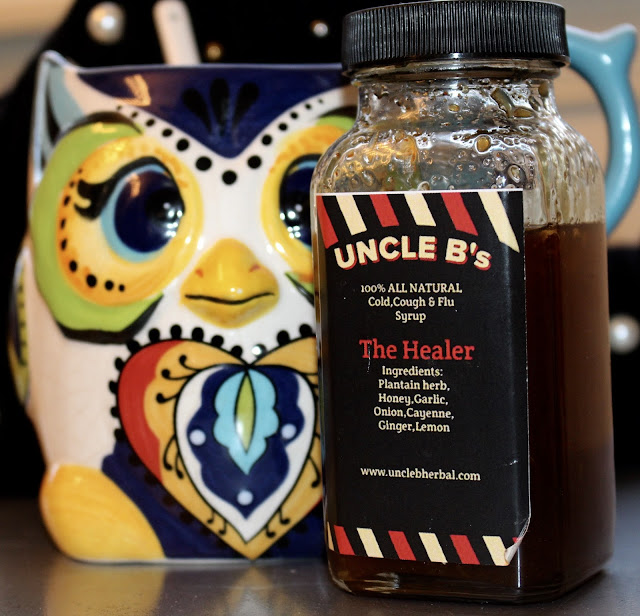 This is a good ole testimonial for the peoples!

Uncle B's All Natural Syrup came through for me in my time of runny nose and congested need! Let me tell y'all all about it:

Last Tuesday I woke up with a runny nose and sneezing all over the place! During the work day I felt pretty well, but by nightfall the sneezing and runny nose began again.  Wednesday morning my symptoms were full blown and RAGING! The congestion began and one nostril was blocked. It was a full day of nose blowing, tired eyes and fatigue.  Midway through the day I remembered: Uncle B's (miracle) syrup!

I whipped up a cup of Sleepytime Detox Tea and put 2 teaspoons of the syrup in. It was a bit spicy, but the concoction tasted good overall.  Anyways, I feel like I needed that kick of spice. Kind of like that good kick pho soup gives the ailing. I repeated this another time or two on Wednesday as well as on Thursday.

FRIDAY I WAS ALL GOOD!

I accredit that to plenty of water intake, sleep and UNCLE B'S SYRUP! Really. Who has a case of the sniffles for just 3 days?? Who????

My cases of the sniffles and congestion usually run for about 5-7 days.  I think if I had began to use the syrup the first day symptoms showed up I could have cut the duration down to maybe just 1 or two days.  I truly believe that.

This is definitely a good product to keep on hand. Pay $16.99 for 6 oz and receive free shipping! You really have nothing to lose with their money back guarantee if you are not satisfied.  Click the link below to get your very own miracle in a jar. 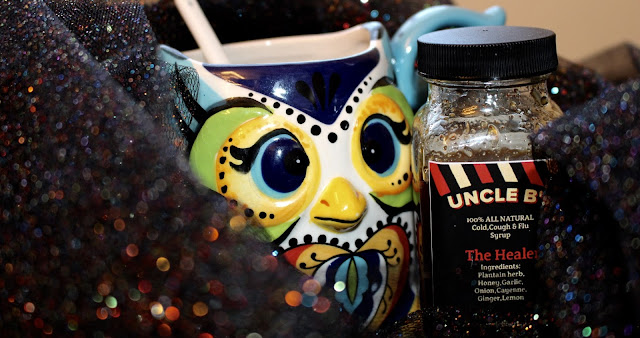 Posted by McKenzie Lacroix at 9:32 AM No comments: Links to this post

Email ThisBlogThis!Share to TwitterShare to FacebookShare to Pinterest
Labels: 'Round DC, All Natural, Health, Review 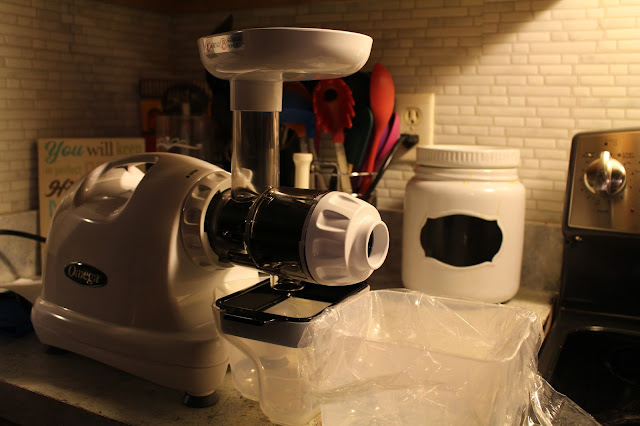 I told you all about the great deal I got on this juicer at Kohl's in the last post. And I'm back to tell you of my experience with using it.

For a first time user of a juicer of any kind, I found this machine easy to use.  I did not use the white hopper part shown at the top of the clear chute. I just fed my fruits and veggies straight into the clear part and used the little stick/wand that comes with the juicer to push them down.

This machine is extremely quiet and produces a lot of juice! I watched a Youtube vid in which the vlogger said a good indicator of a decent juicer is how dry the pulp is.  This pulp that spits out from the Omega is dry! It looked moist, but when I rubbed it between my fingers it left no moisture.  I was surprised! Pleasantly surprised. The assembly was easy, just a few clicks and ready to go, and so was the clean up. Everything just rinsed clean, although I did follow the instructions in the manual and soaked the detachable parts in a large bowl of water and a little dish detergent.

The most time consuming part of it all was the preparation of my produce.  For this first juice I chose to include:

I knew from checking out some juicing articles that I had to quarter the apples. Well... that turned into slicing the quarters further into 8ths for the fruit to make it into the chute. And then, came the beet. That thing was a bit massive, I guess. I've never dealt with beets in any way prior to this juicing, so I was a bit overwhelmed when I had to divide it further and further to get sizes that finally fit.  Here's some pictures from the process: 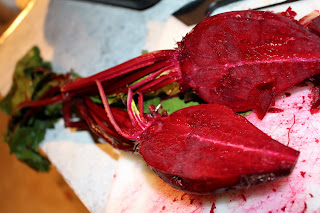 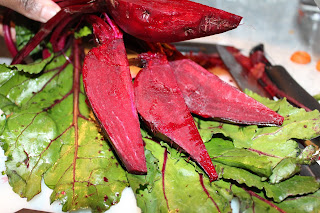 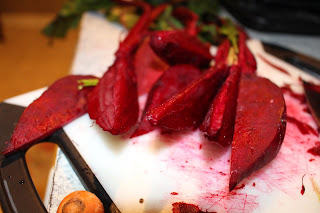 Thought that was kind of cool.

I juiced it all and I actually had a blast doing it! There ya go for some stress relief: Just juice some stuff.

After just a few minutes I was done: 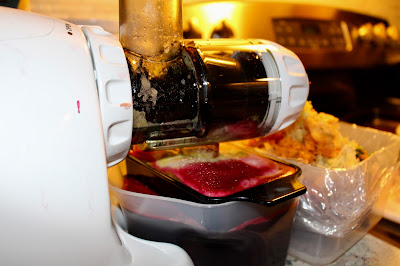 As for the juice... The beet leaves were an overstep. A major overstep. This concoction tasted how fresh cut grass smells. Moist, fresh cut grass. I added some agave sweetener to it and as one would imagine, it did nothing for the grass taste. It made the mix sweeter, but it was still grassy. Then, as a last-ditch effort to make it bearable, I added a few ice cubes. Took me over an hour to slowly sip the 12 oz glass empty. With every sip I did not breathe from my nose. I swallowed and then took a deep breath.

So, 12 ounces down and about another 16 ounces to go, I think (I'd really like to know the capacity of the juice container). I refrigerated the rest of the juice and think it'll be best blended with ice and a banana.

Posted by McKenzie Lacroix at 4:12 PM No comments: Links to this post

Another Step to Keep Cancer Away--I Bought a Juicer! 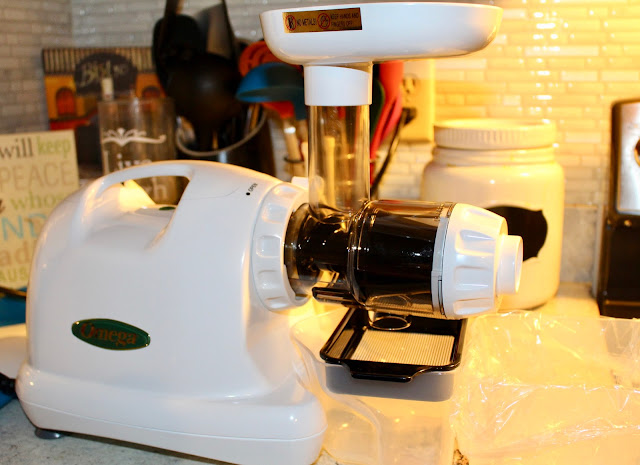 Well. As you may know, 2017 was quite the year for me: Diagnosed with Breast Cancer, 6 rounds of chemo, bilateral mastectomy, reconstruction, ongoing Herceptin treatments... It was a battle, but as all things: did not last forever.

While going through, I questioned what could I have done to maybe have prevented this ailment, but the past being the past and all, I mainly focused on how to get rid of it.  Research brought me to The (Big Bad) Western Diet. This, along with stress and not knowing how to channel and alleviate my internal turmoil cooked up a tumor, I believe. I combated with Western meds, i.e. Anxiety meds, and Chemotherapy along with other targeted therapies.  That was honestly the easy part. The tumor is gone and I consider myself cancer-free.

The hard part is changing my lifelong eating habits. I vowed to never do dairy again. (INFLAMMATION! that leads to disease.) But, damn it! I love pizza and just cannot seem to let it go! I vowed to stop eating meat (much of it loaded with antibiotics and hormones which leads to disease.), but who can resist a fried chicken wing? I mean.. Really! So, it's tough.  And that's not even to mention the daily exercise vows gone by the wayside.

To tell you the truth, at times, I'm disgusted with my lack of drive on these issues. However, luckily, life happens to go on, and I'm here to give it another go each day. And this brings me to the World of Juicing...

..Actually, a vision brought me to this world... And to make a long story short, it involved beets. Researching beets I found that there are a lot of health (and spiritual) benefits. As far as the health tip,  they also have a high glycemic index, which is compared with glucose that has an index of 100. And I have read enough theories on glucose/sugar feeding cancer to want relatively low glycemic index produce in my life. Well, beets have an index of about 65. So, although they are packed with good nutrition, they are also packed with natural sugar that may be a bit too much for me to consume frequently. But, that beet vision put me on the right track: Juice!

I did my research on Juicers and first wanted to go with a Breville. I've heard the name before and thought it may be a respectable brand for small kitchen appliances. I was set on a particular, cutely shaped juicer from that brand, but then I researched more and found out there are masticating juicers, (which this particular Breville was not), that are better than the ones that usually work vertically and just smash products to result in juice. So, then I set my eyes on a Philips masticating juicer. But then I thought to research more and learned about the Omega 8006. I really wanted that juicer, but the retailer I wanted to purchase from, Kohl's, didn't carry it online nor in my local store. So I researched even more and found that the 8006 is the exact same as the 8004, (which Kohl's does carry), except for the color. (Yay!)

I was so set on purchasing from Kohl's because of Kohl's Cash and other discounts. Let me tell ya the great deal I got on this purchase. Check it out:

Seriously, if you are in the market to buy something that costs a little bit, like bedding, cookware, electronics, a season wardrobe change (especially if you are shopping for more than one kid), check out Kohl's during a Kohl's Cash promotion. Usually, you get $10 back per $50 that you spend. You then have to return to shop during a specified timeframe to spend it, but Kohl's always has something to buy. You'll be able to grab something you need or want without a prob.

So, I've got my juicer and have made yet another vow: Juice at least once a week and drink at least 8-12 ounces of fresh juice 3 times a week. HERE'S TO HEALTH & WELLNESS!

Stay tuned for a review on the Omega 8004 and how my first juice turned out.

Posted by McKenzie Lacroix at 12:53 PM No comments: Links to this post