Samsung Note 8 Vs. iPhone 7 Plus [Video] 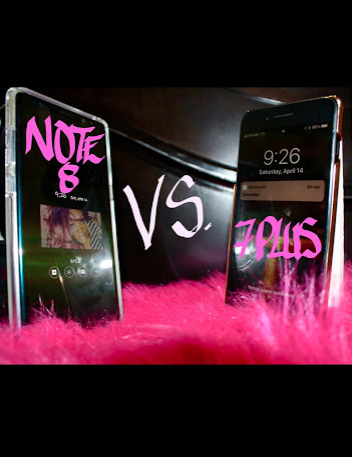 The great mobile phone debate in America:  #TeamiPhone or #TeamSamsung?

Well, I was a proud #TeamiPhone ride or die for many years.  Actually, an android device's malfunctioning pushed me into the arms of Apple's cellular.  Back in 2011 I was on about my 3rd or 4th HTC phone. The very 1st operated on Windows, (another story), but all the rest were Android and I was fairly okay with the experience. The thing I recall from back then with all of those phones was that I dealt with a lot of freezing and shutting my phone down and removing and reinserting the battery, broken battery doors.. These issues overshadowed the cool customizations that the phones offered and the last straw was when my fairly new HTC Evo 3D went bonkers on me and began to restart repeatedly on it own and the battery failed to keep a charge, not that I could do anything with it anyways, since it wasn't operable other than to repeatedly turn itself off and on over and over again.

Anyways, I ended up at the Sprint store, fed up to the max!!  Probably breathing fire and steaming from the ears, I'm sure. That day I bought a cute, small little white square with the glass front and back: iPhone 4. And I was in love with the gadget! It paired nicely with my MacBook and somehow I felt like I'd created for myself a nice little Apple system. Yeah, it was just 2 devices strong, but still.. I was part of something... "Elite", if you will.  You guys know what I mean, right?  And then I got an iPad. (Whaaaaaaat?!) Couldn't tell me nothing at that point. 3 Devices strong. Like... whatevzz! I was synced all 'round. I was never out of the Apple electronic loop and I basked in it! (I'll have to make a post on my thoughts about this level of dependency some day.)

So... long story semi-short.. I yearned for the Samsung Note 8 since its release. That S-Pen!! I just had to have this handwriting capability. And I wanted to draw and write on pictures. I wanted something new. Plus, the Android OS had to have come a long way since 2011, right?! I needed this phone, but I knew it would be a wasteful investment. I currently owned an iPhone 7 Plus and I was extremely happy with it. Fulfilled all my handheld device needs. Why go switching it?? But for months and months the acquirement of the Note 8 remained in the back of my mind. Plus, I met a whole team of developers that were all Android. (Like.. why?)

Well, the time for an upgrade came round and I went for it, and (here's something y'all have heard before), I love it!! In the beginning I felt ashamed, as if I committed an act of betrayal against iPhone. I'd been down for so long and I LOVED the iOS and the recent text message animations and swiping the screen to navigate on apps and the internet. I truly believe I was content, but yet, I still disrupted it.

I've got a new love now.

Posted by McKenzie Lacroix at 5:59 PM No comments: Links to this post